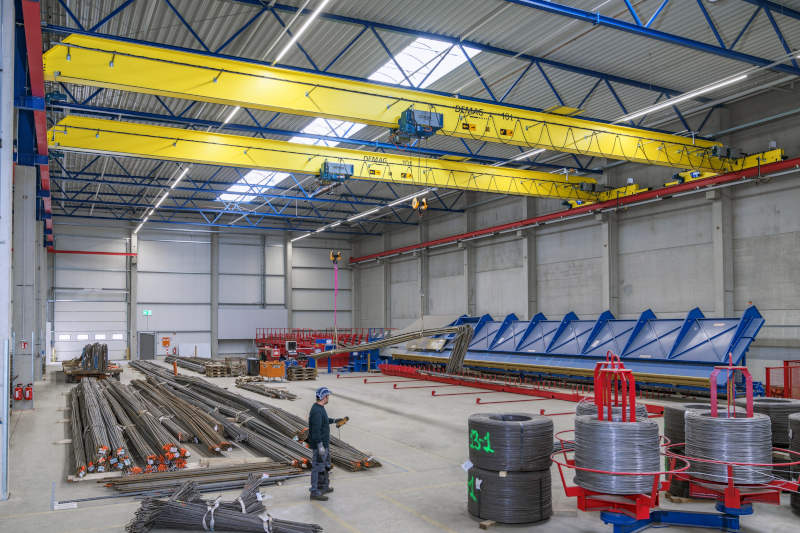 The plant in Hamm, which opened in 2009, specialises in the production of ceilings, columns, foundations and external wall elements. Only last year, the location was expanded by a total of 8,200 square metres of production space.

Inside the facility are a number of Bays including; two OTCs, which travel in smart tandem in Bay 10; two single girder overhead cranes in Bay 11 and a single-girder crane and a double-girder crane in Bay 12. All indoor cranes are equipped with a Demag DMR rope hoist.

“We were searching for a holistic solution for the approximately 8,200 m² production area, with a focus on reinforcement production, and Demag offered a customised solution for us. With our focus on synchronised production with recurring components, modern crane installations provide the foundation,” said Steffen Fester, production manager, Goldbeck.

“In addition to the large span with low headroom dimension, the high speeds of all motion axes as well as reliability were decisive factors for us. Positive experiences from previous business as well as fair pricing led to the final decision.”

The high speeds of all three motion axes are an enormous advantage and the digital load displays allow fast checking of coil and bar deliveries. They also help with small inventories or loading. The tandem function in Bay 10, which is mainly used for steel bars up to 18 metres, enables safe handling with only one control system.

With a clearance of 12 metres between the supports, it was not easy to provide the tandem function with two cranes with a hook centre distance of only six metres. The optical anti-collison system has so far done what it is supposed to do.

The material flow process begins with the delivery of wire coils and reinforcing bars. These raw materials are processed along two material flows and in various steps, combined with other components are then transported to the next production section, where they are refined into finished concrete elements.

At the beginning of the material flow, the raw materials are delivered by truck. The wire coils are delivered to Bays 11 and 12, reinforcing bars to Bay 10. The production line in Bay 10 manufactures the reinforcing bar support for casting the concrete for concrete pillars or foundation cages. Cranes are needed in this step to transport long goods and for precisely serving a cutting machine.

Drawing mats are produced in Bays 11 and 12. Later in the production process, these form the structure of wall elements in all sizes.

The tasks of the cranes are to unload the wire coils from trucks and feed the production line where the coils are automatically cut to length and welded into steel mats. The cranes then transport the mats in bundles to the next step, where they are linked together to form reinforcement cages.

“All of the workshop dimensions, the crane rail and the track gauge were selected so that the cranes can be used in all of the workshops, if necessary. In addition, all of the cranes have a special wheel base of 4 metres, which enables us to meet the static design requirements,’ added Uwe Steinke, sales engineer, Goldbeck.

“The double girder overhead crane in workshop 12 is a special design. On the one hand, it has a trolley that is tailored for handling the reinforcement mats. Our ZKKE has two hoist units on the trolley with an exact hook centre distance of 4 metres in the long-travel direction. This enables both hoist units, which each have a load capacity of 3.2 tons, to pick up mats which measure 3.5 x 9 metres.

“On the other hand, the hoists are suspended from the trolley frame in such a way that the crane headroom dimension is kept as low as possible. The dimensions of the crane determine the headroom dimension for all three workshops – and also affect the requirement for all cranes to be able to operate in every workshop.”